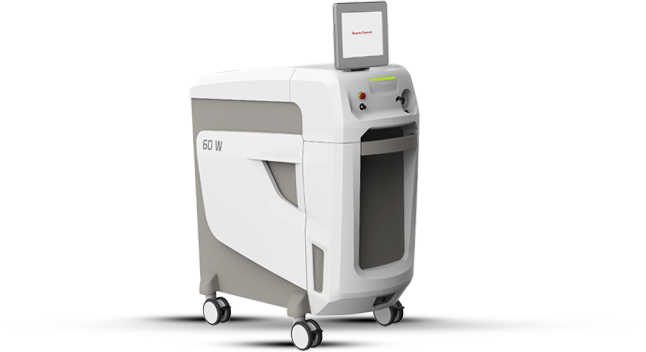 Meaning of the word

Simply stated, it is a laser-assisted prostate enlargement surgery.  In other words, it is called the surgery to remove the whole of the prostate, as in open surgery, with a closed method with unique laser energy. HoLEP consists of the abbreviation of the words that make this explanation in English (Holmium Laser Enucleation of Prostate = Removal of the whole prostate with Holmium Laser)

Let’s first understand the Anatomy of the Prostate

Almost all men, particularly middle-aged and elderly men, have heard the word prostate and are concerned about the disease of this organ in their future lives. However, almost no one knows or understands what this organ is, its location in the body, and why it causes urination problems. That’s why I want to explain this in a language and a way that everyone can understand. 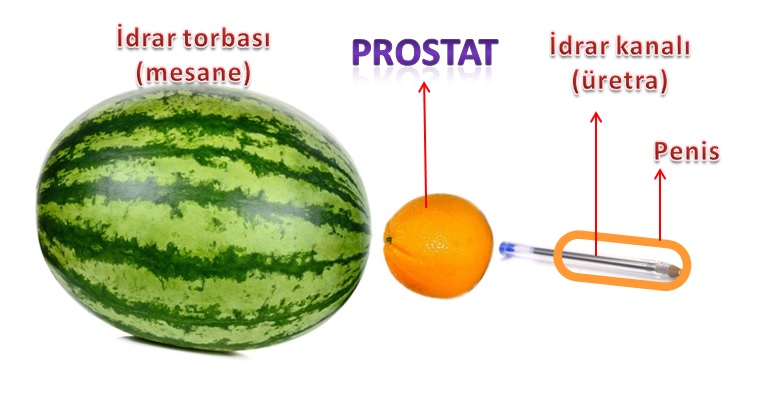 You see a watermelon, an orange, and a ballpoint pen in the picture. Think of the watermelon as a urinary bladder, place an orange next to it, and imagine that you put a ballpoint pen next to the orange. Meanwhile, let’s imagine that we remove the fibrous part in the middle of the orange and discard it. Urine accumulated in the bladder (watermelon) passes through the fibrous part of the orange, through the ballpoint pen, and is ejected from the penis. The orange here represents our prostate. While explaining the anatomical location and prostate diseases, we can simplify it by thinking through this example.

There is a capsule (orange peel) that surrounds the prostate, and there is prostate tissue (orange slices) that grows in advanced ages. If these slices grow towards the fibrous part in the middle, the passage of urine from here becomes difficult and the patient has difficulty urinating.

I will not go into depth about the functions of the prostate here and extend the talk, anyone interested can read about it in detail on other pages of our website. This example can also be used to describe diseases like prostate cancer and inflammation, but we’ll focus on the operations used to treat benign prostatic hyperplasia (prostate enlargement) and, in particular, HoLEP.

Today, prostate surgeries can be performed in two ways.

Understanding open surgery allows us to understand HoLEP. If we explain the most commonly used technique in open surgery through the sample figure; an incision is made under the patient’s belly button, the watermelon (urinary bladder) is reached from here, the surgeon puts his hand inside by cutting the watermelon, enters the orange with the fingertip and puts his finger between the slices of the orange peel from here, and separates. Slices are taken out of the watermelon that has already been cut. 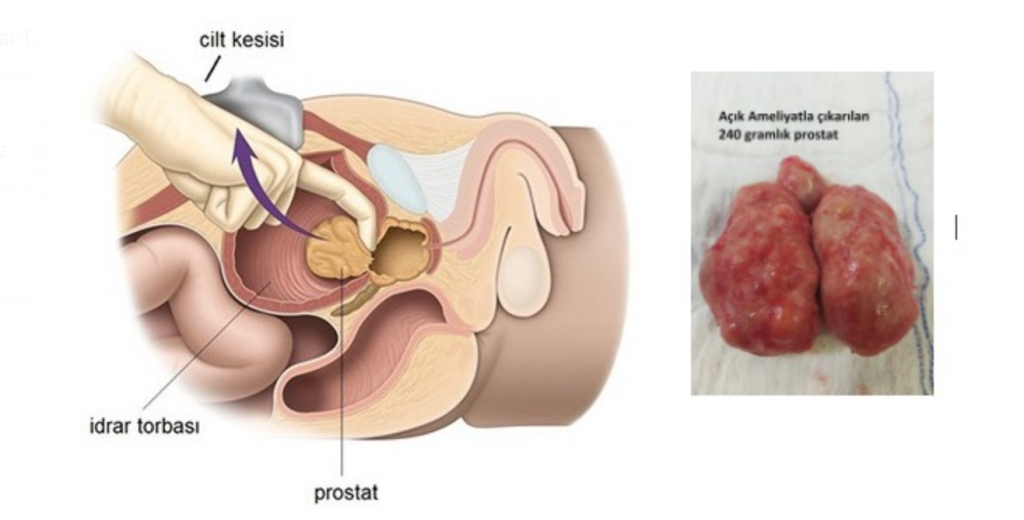 All closed surgeries with many methods are actually performed on the same principle. It is entered with a camera through the urinary meatus located at the tip of the penis, and if we go back to our example, proceed through the ballpoint pen, come to the middle of the orange, and remove the slices of the orange from here, aiming to leave only the peel. The cut slices are taken out of the ballpoint pen piece by piece with camera tools.

Monopolar TUR-P: It is the oldest and most common method with a history of about 70 years. Enter through the ballpoint pen and make your way to the center of the orange, where you will use a small spoon to cut pieces from the slices and clean all of them up to the peel (Direction: from the center to the peel). 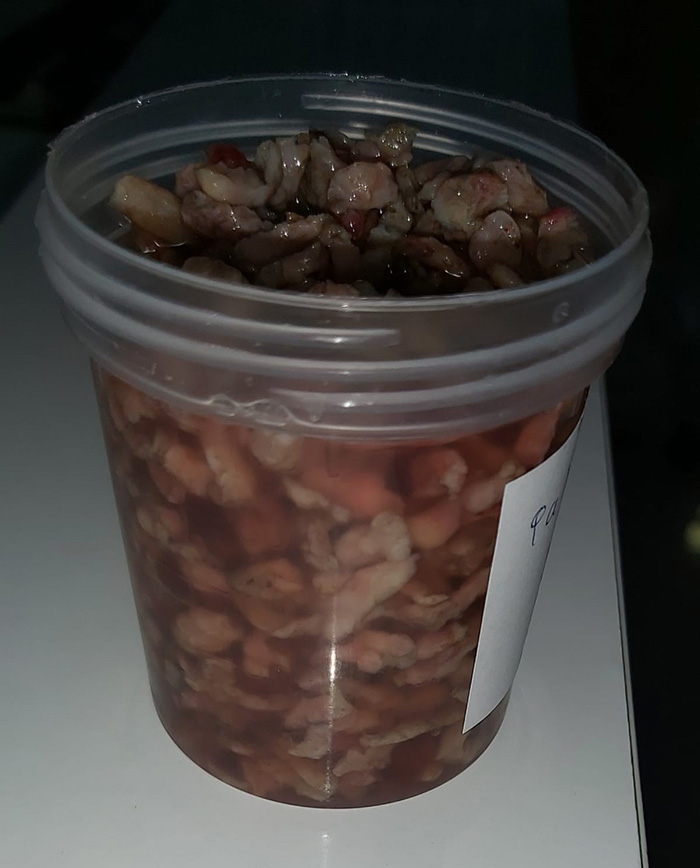 Greenlight LaserLaser energy has been widely used in prostate surgeries in the last 20 years. This is one of the most famous laser devices in this regard. In the operation, the camera is entered through a ballpoint pen with a camera tool, and the middle of the orange is reached, where the orange slices (tissues) are melted with laser energy and vaporized by firing from a long wire of the laser device. Therefore, in this method, no pieces are taken out.

HoLEP: It has been implemented for the last 10 years but has recently grown in popularity. As a surgical procedure, it distinguishes itself from other closed surgeries. Again, it is entered through the ballpoint pen with camera tools. At the point where the ballpoint pen ends, it is entered between the orange slices and the orange peel by cutting and burning with a laser device. Just like in open surgery, the slices are separated from the peel as a whole and dropped into the watermelon. Then, with a different device, again with a camera system, the orange slices that fall into the watermelon are cut into small pieces and taken out from the ballpoint pen. (Direction: direction cannot be mentioned here, because the orange is completely separated from the shell)

Is there any erection problem after HoLEP surgery?

Let’s go back to the previous analogy. The nerves that provide erection pass outside the orange (prostate) peel. You can think of them as the paper wrapping oranges; nerves and veins that wrap the whole orange. Since we do not have a job with the outside of the peel in this technique and the Holmium energy used can only affect 0.4 mm away from the material used, the nerves that provide erection cannot be damaged/injured. Therefore, there is no erection problem occurs after surgery.

Will there be urinary incontinence after HoLEP surgery?

Where the orange ends and the ballpoint pen begins there are the muscles that hold our urine. As long as this area is not damaged, there will be no urinary incontinence after surgery. This applies not only to HoLEP but also to all closed surgeries. Therefore, this issue is entirely related to the experience of the surgeon.

What are the advantages of HoLEP?’

When opposed to open surgery, it has great advantages. In open surgery, the patient has an incision, remains stuck for 1 week, and it may take up to 1 month to return to work. In HoLEP, the catheter stays for 1-2 days, and the patient does not have an incision. Compared to closed surgeries, it does not leave any prostate tissue behind, which is its biggest advantage. This prevents future complaints due to prostate enlargement in the patient by re-growing the remaining tissues. Other advantages include the ability to be done in patients on blood thinners, as well as patients with high-risk diseases like asthma and heart failure.

In which diseases are the HoLEP procedures applied?

There are many kinds of diseases of the prostate. The prostate can enlarge benignly, but it can also develop cancer (Prostate Cancer), as well as diseases like infection (Chronic or Acute Prostatitis). The treatment of each disease is different. Surgery is not always required for benign prostatic hyperplasia. HoLEP is applied in benign prostatic hyperplasia disease that requires surgery.

For Which Patients Is HoLEP Surgery Suitable?

Open surgery, not closed surgery, gives better results in prostates larger than 80 grams. As explained above, it is the ideal method for prostates of these sizes as open surgery technique is applied in surgeries performed with HoLEP technology. It can also be used with confidence in prostates weighing less than 80 grams, and it is superior to other closed surgeries in these sizes as well. It can also be applied after the doctor’s evaluation in patients over 80 years of age or with additional diseases.

Does HoLEP technology have a negative effect on sexuality?

The problem of semen not coming out after intercourse is faced after all prostate operations. However, this does not mean that the man does not ejaculate. He feels the sensation of ejaculation after orgasm, but the semen that will come out is often poured into the bladder. For the patient, this is okay except to have a child naturally. Most of our patients who have already performed this surgery are over the age of 60 and generally do not think of having a child again. Aside from that, patients who do not have issues with their pre-operative sexual functions do not have any problems after HoLEP surgery, such as erection problems, a reduced pleasure during sexual intercourse, or ejaculation cessation.

This website uses cookies to improve your experience while you navigate through the website. Out of these, the cookies that are categorized as necessary are stored on your browser as they are essential for the working of basic functionalities of the website. We also use third-party cookies that help us analyze and understand how you use this website. These cookies will be stored in your browser only with your consent. You also have the option to opt-out of these cookies. But opting out of some of these cookies may affect your browsing experience.
SAVE & ACCEPT
COVID-19 Önlemi